Risks and opportunities for Tasmania

A changing climate will present both risks and opportunities for Tasmania.

It is important that we take action to adapt and reduce our vulnerability as well as take advantage of any opportunities. Learn more about the risks and opportunities for Tasmania to reduce emissions and adapt to a changing climate. 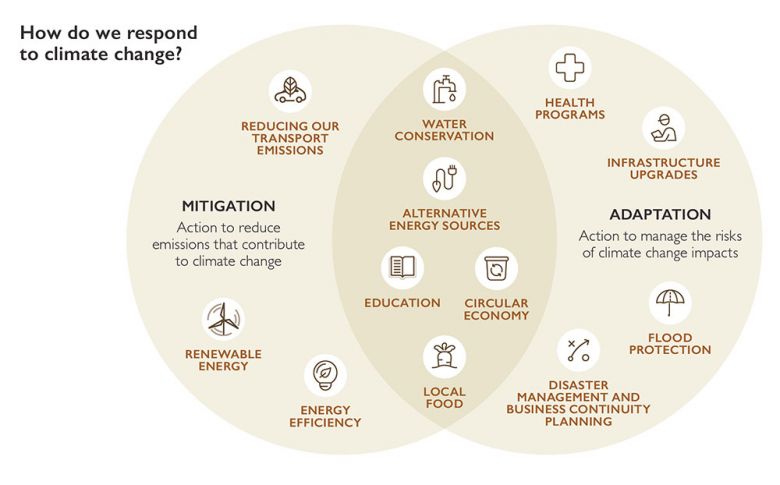 Adaption is action to manage the risks of climate change impacts:

Mitigation is action to reduce emissions that contribute to climate change:

Impacts of climate change in Tasmania

What we have seen

Climate change impacts are here and now. Australia’s climate has already warmed on average by 1.44°C since 1910, with most of the warming recorded since 1950. Australia’s warmest year on record was 2019, and in 2020 Tasmania had warmer nights than usual for much of the year, especially in the North-East. 2019 was also Australia’s driest year on record, with annual rainfall 40 per cent below average, and much of Australia affected by drought.

In the last five years, Tasmania has experienced two significant bushfire events, a record marine heatwave off the East Coast, prolonged dry periods in 2015-16 and 2019-20, and the worst statewide flooding seen in 40 years.

These events have had an environmental, economic and social impact on governments, businesses, communities and households.

What we’re likely to see

The Climate Futures for Tasmania (CFT) project is the most important source of downscaled climate change projections for Tasmania. Downscaling is a process where coarse-resolution Global Climate Model outputs are translated into finer-resolution climate information so that they better account for regional climatic differences, such as local topography.

Through CFT modelling, we can better understand how the Tasmanian climate is likely to change between now and 2100. In addition to general data, there is specific information for agriculture, coastal impacts, and water and catchments. This modelling projects significant changes in rainfall patterns; a rise in annual temperatures and more hot summer days; longer fire seasons and more days at the highest range of fire danger; sea level rise; ocean acidification; and increased East Coast water temperatures. Extreme weather events are projected to increase in frequency and intensity over time.

Learn more about detailed projections for your local government area, and where our climate change projections come from.